As it’s St David’s Day this coming Saturday, I thought I’d share my Nan’s Welsh Cake recipe.  My Nan has made these for years and they are a firm favourite with the whole family, especially the little ones and the not so little ones!

Elsewhere on my blog I’ve added a recipe for alternative flavours for Welsh Cakes, but this is the real deal.  I know that the thought of lard in baking can put some people off, but I’ve made this recipe with normal lard and vegetable fat and they both taste just as good. 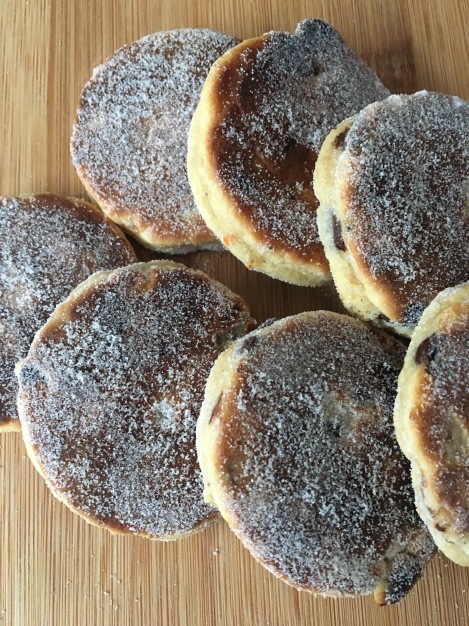 A batch of these baked fresh for the office on Friday, or as an afternoon treat on Saturday with a cup of tea is a must…and if I don’t bake some then I will be told off!

1. Place your bakestone or heavy frying pan on the hobs to a low heat.

2. Sift the flour and spices into a large bowl, then rub into the flour the lard and butter until the mixture looks like breadcrumbs.

3. Mix in the sugar and currants and then add the beaten eggs and golden syrup. (Tip: heat the syrup slightly so that it is easier to mix into the other ingredients)

4. Bring the mixture together in the bowl until it forms a dough – do not over work the mixture.

5. Once the mixture has come together, tip out the dough onto a lightly floured surface and roll out/flatten to 1cm thickness.

6. Cut out into 2 inch rounds, grease your bakestone/frying pan with a little lard or butter and cook your Welsh Cakes until they are a ‘nut brown’.

7. Don’t over-crowd the pan and grease the pan in between every batch.

8. Once baked, sprinkle liberally with caster sugar and serve.

9. Can be served warm from the bakestone or cold.  Store in an air-tight container, in a cool place and eat within 3-5 days.