Welsh Cakes are a hybrid between a biscuit and scone, even though it says cake in the title!  The mixture is very similar to that of a scone, but is ‘baked’ on a bakestone like an English Muffin.  The basic recipe consists of flour, sugar, eggs, butter, lard or vegetable fat, eggs and a little milk.  Currants, mixed spice and nutmeg are then added and are the traditional elements of a Welsh Cake.

I grew up eating Welsh Cakes or ‘Pice’ (pick-eh) as we’d say in Wales.  The translation for Welsh Cakes is ‘Picau ar y Maen’, which means effectively cakes cooked on the bakestone.

Today I decided that I would make two different types of Welsh Cakes, both of which I’m very happy with and have gone down very well with the family!  My two Welsh Cake recipes with a twist are:  Dark Chocolate, Orange & Ginger and White Chocolate, Raspberry & Cardamom.  Each recipe will make 25-30 Welsh cakes and the method is the same for both variations.  Happy Baking!

1. Sift the flour and spices into a large bowl and rub the lard and butter into the flour until the mixture looks like large breadcrumbs.

2. Mix in the sugar, fruit and chocolate chips and then add the beaten egg and golden syrup. (Tip: Heating the syrup slightly will make it is easier to mix into the other ingredients)

3. Bring the mixture together in the bowl until it forms a dough – try not to over work the mixture.  (Tip: I use a butter knife until it starts to come together and then use my hands to gently make it into a ball.)

4. Tip the dough onto a lightly floured surface and roll out/flatten to 1cm thickness.  I do this in two batches so that it’s easier to handle the dough.

5. Place your bakestone or heavy frying pan on the hobs to a low heat.

6. Cut out into 2 inch rounds, grease your bakestone/frying pan with a little butter and cook your Welsh Cakes until they are a ‘nut brown’.

7. Don’t over-crowd the pan and grease the pan in between every batch.

8. Once baked, sprinkle liberally with sugar and serve.

9. Can be served warm from the bakestone or cold. 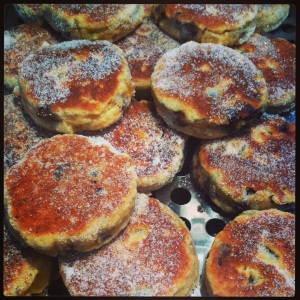 Welsh Cakes cooling on the rack with a dusting of caster sugar.

Method is the same as above. 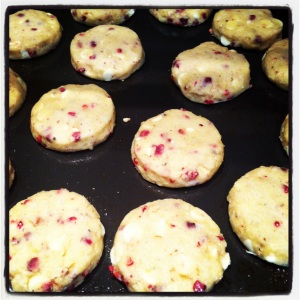 Welsh Cakes browning on the bakestone.

2 responses to “Welsh Cakes with a twist!”